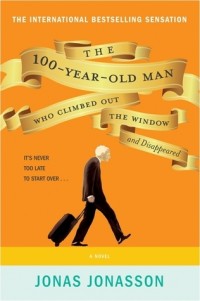 ” (2012, English Translation by Rod Bradbury, Hyperion, paperback $9.52, 396 pages) is a timeless read that spans a century. It is the kind of book that leaves a reader pondering fate and life as the story traverses exotic places under a fantastical interpretation of history.

The novel begins as Allan Emmanuelle Karlsson escapes from his nursing home on his one-hundredth birthday and steals a suitcase full of money.  This theft soon launches Allan on a path of lawlessness that leads him to develop heartwarming friendships.  While this storyline is entertaining in and of itself, other chapters focus on the centenarian’s life story.  Thus, the reader embarks on an international history lesson starting at Allan’s birth in 1905.

Allan is portrayed as a vodka-loving, apolitical, anti-religious, dynamite expert, bomb-making, accidental intellectual. Despite Allan’s best intentions to live a simple life, he influences world leaders during global crises such as the nuclear arms race and tumultuous times like the Korean War.  He even develops a slapstick friendship with Albert Einstein’s brother. While the circumstances that cause the “devil-may-care” narrator to influence world events stretch more and more toward the absurd, Allan becomes as endearing and unforgettable as Forrest Gump.

Jonas Jonasson describes his novel as “An intelligent, very stupid book.”  And while I think that sums the book up nicely, it does not fully capture the tall-tale humor, the satirical glimpses of multicultural humanity, or the cleverness of the story telling.  Jonasson even crafts an alternative explanation for the suitcase theft that left me laughing out loud.

Originally released in Sweden, the novel quickly drew international acclaim and was released as an American movie in 2015.  The movie received the Oscar nomination on January 14, 2016, not for the writing, but for Best Makeup and Hairstyling, which somehow seems almost as comical as the book, and maybe even a tad ironic. Whether or not the movie wins the Oscar for Best Makeup and Hairstyling, it won’t diminish or enhance a reader’s enjoyment of this wildly entertaining novel.