DEA Removes Some CBD off Schedule 1

The U.S. Drug Enforcement Administration has taken some cannabidiol off the most restrictive class of controlled substances, a move that allows the sale of the first non-synthetic, cannabis-derived medicine to win federal approval according to a report by Hemp Industry Daily, on September 27.
The agency announced that drugs including “finished dosage formulations” of CBD with THC below 0.1% will be considered Schedule 5 drugs as long as the medications have been approved by the U.S. Food and Drug Administration. It is the first time the agency has removed any type of cannabis from Schedule 1.
The action came three months after the FDA approved Epidiolex, a CBD preparation for rare types of epilepsy that is made from cannabis grown in the United Kingdom.
If the DEA had not taken this step, doctors would not have been able to prescribe the medication because Schedule 1 drugs cannot be prescribed. This rule is why physicians in states with medical marijuana laws recommend the plant but can’t prescribe it.
The change also means Epidiolex will be distributed through traditional pharmaceutical channels, from a doctor’s prescription to a drug store, instead of through a marijuana dispensary or designated marijuana caregiver.
The DEA said the new scheduling applies to “FDA-approved drugs that contain CBD derived from cannabis and no more than 0.1 percent tetrahydrocannabinols.” Even though Epidiolex is the only formulation that currently meets the definition, the change could eventually affect other CBD formulations.
It’s still not legal to make CBD in the U.S. The DEA said that “the bulk cannabis material used to make the Epidiolex formulation (as opposed to the FDA-approved drug product in finished dosage form) will remain in schedule 1.”
A Schedule 5 drug is still illegal without a prescription. The DEA says Schedule 5 drugs have a low potential for abuse and are generally pain relievers and anti-diarrheal medications.
It’s a step that many Cannabis entrepreneurs cheered, even though it currently applies to only one drug for rare diseases and has a price tag that is likely to limit the market.
London-based GW Pharmaceuticals, the manufacturer of Epidiolex, has said it will charge $32,500 a year for the treatment, in line with other medications for intractable epilepsy.
At that price, many patients likely will wait to see if insurance covers the drug, a decision usually driven by yet another federal agency, the Centers for Medicare and Medicaid Services. 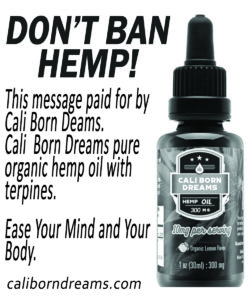 Move over GW Pharmaceuticals
Earlier in September, Coca-Cola Co. said it’s eyeing the cannabis drinks market, becoming the latest beverage company to tap into surging demand for marijuana products as traditional sales slow. Coca-Cola announced its interest in drinks infused with CBD and is in talks with Canadian marijuana producer Aurora Cannabis to develop the beverages, according to a report from BNN Bloomberg Television.
“We are closely watching the growth of non-psychoactive CBD as an ingredient in functional wellness beverages around the world,” Coca-Cola spokesman Kent Landers said in an emailed statement to Bloomberg News. “The space is evolving quickly. No decisions have been made at this time.”
Laws and regulations that define the hemp extract, who can use it and who can sell it, differ from state to state. In Colorado, marijuana-derived CBD products are sold in dispensaries and hemp-derived CBD products are sold in health food stores, coffee shops, smoke shops and spas.
Things get a little complex when comparing the California Department of Public Health‘s (CDPH) ban on CBD products with California law, Federal law, and the voter’s mandate in prop 64.
Dana Leigh Cisneros, Esq., an experienced attorney from The Cannabis Corporate Law Firm, told Cannaverse Solutions, a cannabis marketing and branding agency, that “Industrial hemp and its derivatives, compounds, and extracts, are all lawful in California under the Health and Safety Code.”

The CDPH also contradicts the allowed use of industrial hemp in products as laid out by California’s industrial hemp statute. So, while CBD derived from industrial hemp is now banned in California, it remains legal on a national level. Cisneros also noted that the ban is liable to expand to cover hemp derived CBD in topicals and vape cartridges as well… “Effectively, CDPH is banning all hemp derived CBD products”.
Why the Ban? The Food and Drug Administration (FDA) says that it cannot be 100% sure where the hemp being used to manufacture food products has come from, which means it can’t be 100% sure that it’s safe for humans or animals to consume. As such, until the FDA approves CBD derived from industrial hemp, it will remain off-limits.
California was the country’s largest market for CBD products. Local Distributor Caliborn Dreams, having ceased distribution of Hemp oil CBD in California retail locations due to the recent ban, has resorted to online sales to out-of-state buyers. “Business is harder, but we’re still hitting our numbers.” As for the many long time CBD users in California, the ban has driven the market underground for them.