Honey I Shrunk the Computer 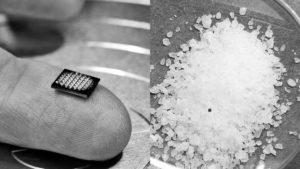 Ever since the original transistor radio debut in the early ’60’s, science has been miniaturizing electronics daily and the computer is no stranger to these changes.  Did you know it was only three years ago that Intel released a computer so small it looked like a thumb drive (USB flash drive)?  Wait until you see what IBM just did.

Perhaps you can’t see what IBM did to the latest computer because it is so small it is nearly invisible.  This computer on a chip would fit nicely on the surface of coarse ground salt – yes, as small as a grain of sand, or salt in my example.  It’s simply amazing the transformation of circuits and transistors originally the size of a dime, now millions of them on a grain of salt.

IBM’s new computer on a chip measures a scant 1 x 1 millimeter.   Although not a supercomputer (yet) this marvel has the power of a 1990’s full-blown PC.  Remember the Charlie Chapman commercials for the original IBM PC?  Just think of mashing two or three of them into a 1 x 1 mm chip.

Even more amazing is the cost of this tiny marvel.  The original IBM PC cost about $2500.00.  This little guy is only ten cents and is packed with “over one million transistors,” according to IBM. Yikes, with a hand full of these babies, I will rule the world.  No wait, that’s an exaggeration – it will take two hands full to rule the world.

“Within the next five years, cryptographic anchors, such as ink dots or tiny computers smaller than a grain of salt, will be embedded in everyday objects and devices,” said Arvind Krishna, IBM’s head of research.

Just imagine the uses of a computer as tiny as a grain of salt, then imagine the power these things will gain over the next four years.  Are brain implants in your future?  Could be, think about it.