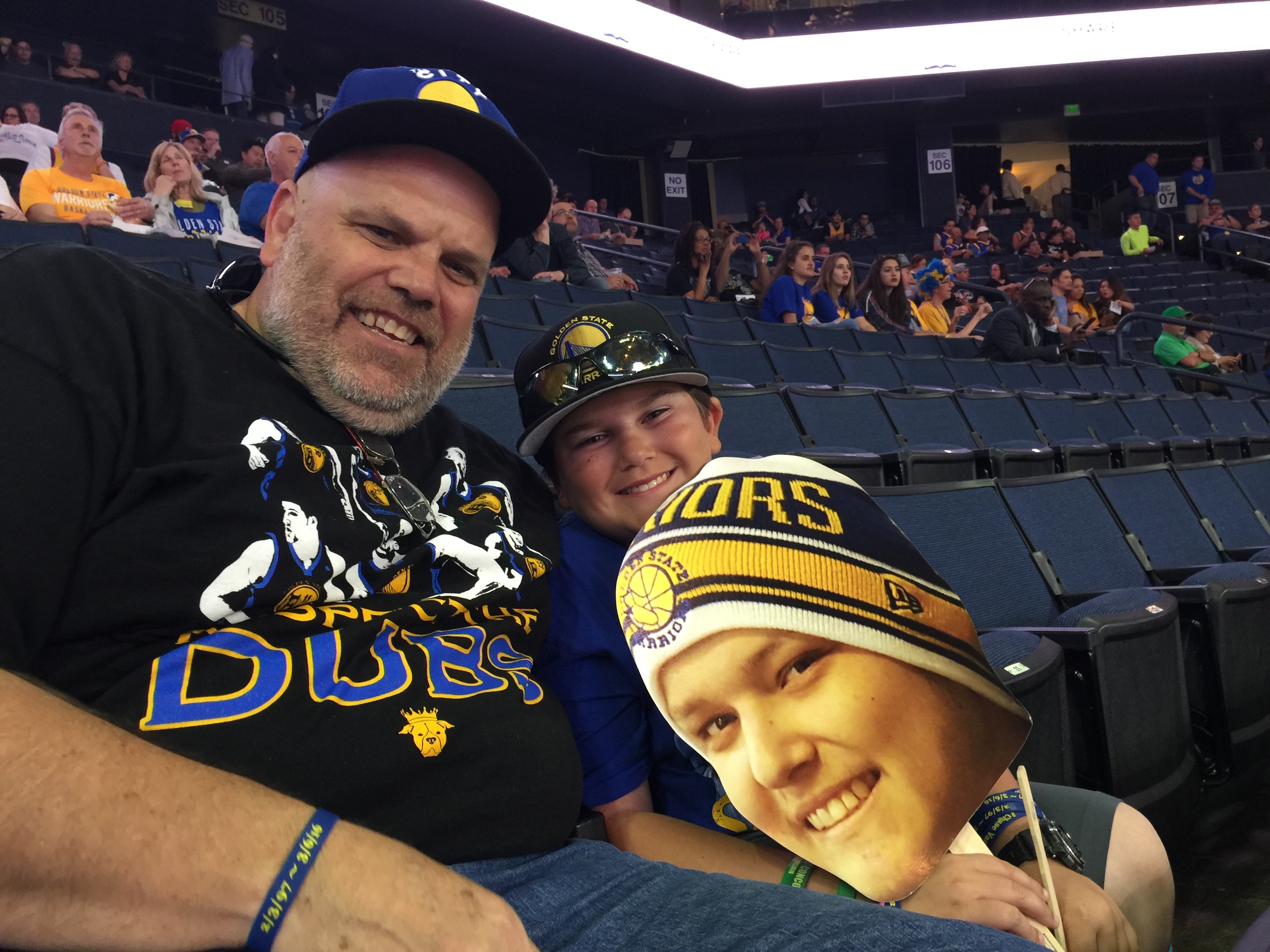 Chase Van Sickle and his Dad, Maurice enjoyed their moments watching  Golden State Warriors broadcasts.  The family were HUGE fans.  Chase had been battling cancer for eight years, since age 11. When the Warriors had heard about Chase’s battle with cancer, they presented them with tickets to go see a Warriors game in person.  Chase passed away before game d
ate.

Chase Van Sickle lost his battle to cancer at the age of 19.  It is said one never fully heals from losing a child.  This article is about the grieving process –the struggle family and friends make to keep the spirit alive of a close loved one lost.

But first, a brief background story of Chase’s eight year battle with cancer.

In fifth grade, Chase was 10 years old.   He  decided to grow his hair long for Locks of Love for his grandmother who battled but survived breast cancer.  Both his brother, Clayton and sister, Annaliese joined in the cause.  Classmates would tease Chase about his hair length, but he didn’t care.  He remained steadfast to his mission.

In the fall,  it was time to cut his  hair.  He had been complaining of a painful bump on his leg and had it examined at John Muir.  It was Ewing Sarcoma, a rare bone cancer.

That was right as he was entering Pine Hollow at age 11.  He began cancer treatment with chemotherapy and radiation that went on for a year and a half.  Then the good news, it was gone.  It went into remission.  However, the treatment had killed the growth plates in his leg.  As he grew, his leg did not. Eventually it became nearly three inches shorter than his other leg.  He had a special shoe made with a 3-inch sole to equalize his footing.

Four year and a half years later,  in a follow-up checkup, doctors found that cancer had returned.  This was a different variation of cancer called Osteosarcoma which thrives on bones weakened by radiation.  They treated it surgically by removing the tumor, along with  half of his femur and replacing his knee.  It was successful, but in a follow-up check up, they discovered that the cancer had metastasized in his lungs.  After eight years, his battle was coming to an end.

It was during this eight year period that Chase met and kept his closest friends.  They were by his side at his home up to the very last day until he passed.  His last words to them the night before, after he became too weak to talk, was a thumbs up “goodbye”.

His services packed the Multi-Use room at Clayton Valley Charter High. Family and friends, some traveling as far as from Boston, paid their respects.  The service revealed the full scope of just how strong, brave and funny Chase was.   Throughout the eight years, Chase kept his sense of humor – an off beat, yet never-ending string  of wit and absurdity that had affected (and entertained) everyone that knew him, teachers, family and friends.

Chase was cremated.  This article was titled “Life after Death” for a reason.  It’s about how one keeps the spirit alive.  The family made a cardboard headshot of Chase and still takes him on outings,  including the Warriors game he never made.  His mother,  Leslie carries some of his ashes in a locket that she wears.

Three of his closest friends each designed tattoos reminiscent of their friendship.  This was Alex King’s  first tattoo,  a goofy owl,  a private joke between Chase and him.  It was something they gave each other on their birthdays,  disfigured owl decorations that they had found at Orchard Supply Hardware.  Friend JT and Chase, were art academy students at Clayton Valley and spent much of their time drawing stick figures in and out of school. And Julia Mangini had a tattoo designed of his special shoe with the word “Mayonnaise.” This is how Chase had signed her yearbook, with one word.   “mayonnaise.” And most recently, on May 26, Pine Hollow Middle School hosted a “Chase-ing Cancer Color Run” fundraiser for the Lucile Packard Foundation for Children’s Health in memory of Chase. Each participant bought “Chase-ing Cancer”   T-shirts with proceeds going to the foundation. It was well attended with students, friends, teachers and family.

Chase Van Sickle touched a lot of souls and despite his departure, his spirit has found fitting ways to stay among his friends and family in with never-ending sense of humor and passions.